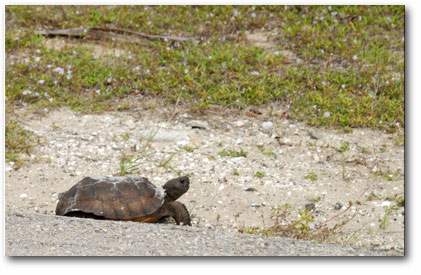 Gopher tortoises take a long time to mature ( 10-15 years) and can live 40 years or more. Tortoises mate during April and May. Female tortoises lay up to a dozen eggs or more, usually in front of their burrow in a sunny location. The incubation period of tortoise eggs varies from 70 to 90 days in Florida to more than 100 days in Georgia. Tortoise eggs are a favorite of many animals including; raccoons, foxes, skunks, alligators, fire ants, and others. Predators are believed to destroy more than 80 percent of gopher tortoise nests.

Many animals beside the Gopher Tortoise utilize gopher tortoise burrows. The tortoise burrows are used for shelter by dozens of animals. The gopher frog, the Florida mouse, pine snake, gopher cricket, and others seek the dark, cool, shelter of gopher burrows to escape the heat and hide from predators.

Tortoise racing has been outlawed by the Florida legislature. Tortoise racing was a Florida tradition. It was a popular way to raise money for local churches and civic organizations. Unfortunately the practice also removed many mature tortoises from their natural habitat and thus contributed to the decline of the species.

Tortoise is considered a delicacy by some people. Tortoise may be tasty but it does not cure high blood pressure or impotence as some have suggested. Tortoise harvesting is now illegal in every state though illegal commercial harvesting does take place to supply the demand for gopher meat. 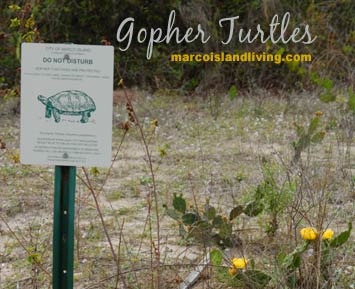 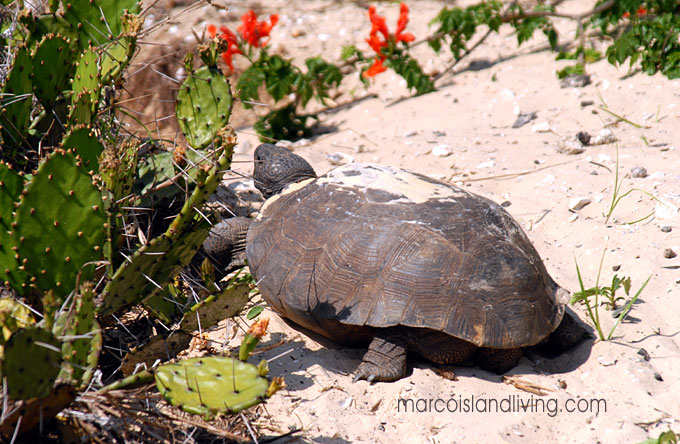